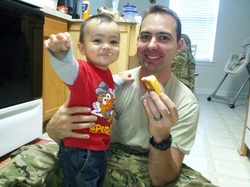 Sgt. Steve Blass, 27, of Estherville was one of five Americans killed Monday
in a helicopter crash in southern Afghanistan, Blass’ family confirmed Friday
through the Henry-Olsen Funeral Home.
Blass was married and had a young son, said Brandon Johnson, a childhood
friend from Estherville.


Blass joined the Army’s 101st Airborne Division a few years after high school
and served during multiple tours overseas. He had hoped to train as a pilot.
“He absolutely loved being on helicopters,” Johnson said. “He really loved
his job.”
Blass was the first casualty of the wars in Iraq and Afghanistan for the
northern Iowa town of about 6,000, Johnson said.
“It hits close to home,” he said. “Everyone kind of feels it.”
Services are pending, according to the funeral home. Attempts to contact
family members Friday were unsuccessful.


More than 90 Iowans or service members with Iowa ties have died in Iraq or
Afghanistan since the Iraq war began in March 2003.
Monday night’s crash brought the total number of U.S. troops killed that day
to seven, making it the deadliest day for U.S. forces so far this year. Two
members of U.S. Special Operations Forces were gunned down hours earlier in an
insider attack by an Afghan policeman in eastern Afghanistan.
The NATO military coalition said in a statement that “initial reports” showed
no enemy activity in the area at the time. The cause of the crash is under
investigation, the statement said.
A U.S. official said all five of the dead were Americans. The official said
the helicopter went down outside Kandahar city, the capital of Kandahar
province.
The five dead included everyone aboard the UH-60 Black Hawk, said Maj. Adam
Wojack, a spokesman for the international military coalition in Afghanistan.
Their deaths make 12 U.S. troops killed so far this year in Afghanistan.
There were 297 U.S. service members killed in Afghanistan in 2012, according to
an Associated Press tally.
Monday’s crash was the deadliest  since August, when a U.S. military
helicopter crashed during a firefight with insurgents in a remote area of
Kandahar. Seven Americans and four Afghans died in that
crash.