Joseph Alvin Richardson was born September 10,1989
in Algona, Iowa. The son of Greg and Ginette (Fouarge)
Richardson.  He grew up in Algona
where he attended Seton Elementary School
through sixth grade and then transferred to Algona
Public Schools where he continued through the
ninth grade.  His family then moved to Arkansas where he finished his schooling,
graduating from the Booneville High School in May of 2008.

While
attending school in Booneville, Joe was involved in drama, golf, cross country
and was a member of the Future Farmers of America.  He was also nominated and
participated in the Booneville High School Mr. and Miss Pageant his junior year.
He worked at the local KFC for two years and a short time at Sonic before
leaving to join the United States Army in June of 2008.
Upon finishing his
basic training, Joe was stationed with the 1st Infantry Division at Fort Reilly,
Kansas.  Joe and his unit, 1st Battalion 28th Infantry Regiment, 4th Brigade
Combat Team were deployed to Iraq for a tour of duty from September 2009 to July
of 2010.  On November 5, 2010, Joseph was united in marriage to Ashley Harris in
Booneville, Arkansas. After their marriage they resided in Kansas.  Joe loved
his job in the Army and fighting for his country and our freedom and had
recently re-enlisted to serve another six years.

Sergeant Joseph A.
Richardson died Friday, November 16, 2012, in Paktika Province, Afghanistan when
rebels attacked his unit.  He was 23. 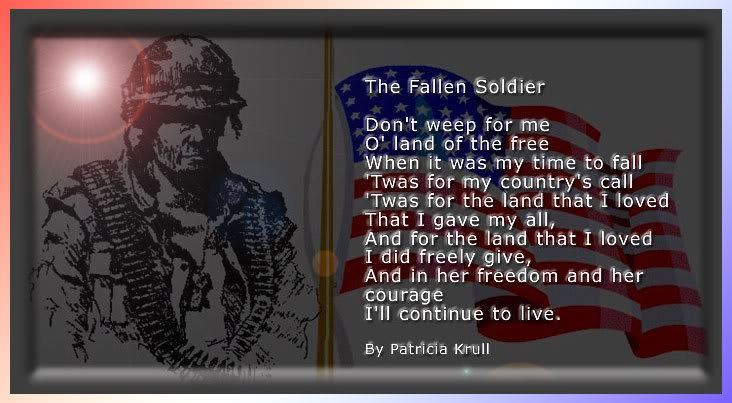