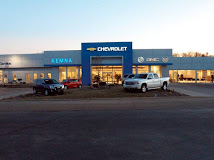 May 4th marks the fourth anniversary of Operation Kemna: Iowa Cares, a program that sends care supplies to service men and women
overseas. Yellow ribbons and "We Support  Our Troops” signs line the streets of small towns all over the country. Algona,Iowa is no exception. Community may bring packages to Kemna Auto Center, a General Motors Dealership, to send to troops overseas.
Serving as the drop off site, Kemna Auto pays postage for all packages Since the inception of Operation Kemna: Iowa Cares in 2004, the women of Kemna Auto have packaged , labeled and sent thousands of labled and sent thousands of packages to service men and women from the Algona and Fort Dodge units. Kemna's marketing director Pamela Ridner coordiinates the promotion. "I send everything from the average box that costs $23 to send a computer for a young soldier in Korea so he can take e-mail courses that
cost $105," Pamela says. "I am very proud of Kemna's for spending thousands of dollars to date on this endeavor."

The community offers non-failing support by matching Kemna Auto monetary contributions. Pamela says, " The Support comes
from firefighters giving up their on-call pay to donate to the fund and elementary students having supply drives and wrting letters
and writing letters to soldiers. Civic groups including the Lions and the Rotary clubs help pack supplies and sell raffle tickets in the
large annual Christmas drive." For the past three years, local manufacturer Snap-On Tools has donated a roll cab valued at 8,000 to raise money in the Christmas raffle drive.

Kemna Auto received for their ongoing promotion during the state Army National Guard "Freedom Salute Ceremony" in 2006.
Adjutant General MG Ronald Dardis presented them with a bronze eagle award and a silver dollar commemorative for excellence.
MG Dardis praises the Kemna team for their commitment to and support of the deployed soldiers saying, "You have no idea how
much your support has meant to our men and women in the field, they would not be able to do their job without the support and
do their job without the support and caring of businesses like Kemnas.”